A healthy woman at 5 weeks pregnancy presents with one day of recurring syncope and abdominal pain, no vaginal bleeding, BP 80/40. 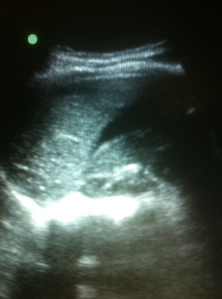 With an unstable early pregnant patient with free fluid in the abdomen, I was able to diagnose a presumed ruptured ectopic at the bedside, cross-match blood and call Gynecology. This was before any labs came back, which were unhelpful anyway as the initial Hgb was falsely reassuring at 120–but by the time she was out of the OR a couple of hours later it was in the 60s.

Had I relied on the initial Hgb or called in a radiology tech after hours for a formal ultrasound, it could have been a disaster. POCUS saved the patient, and is essential in the early diagnosis of ectopic pregnancy.

A couple of articles on the importance of POCUS for rapid diagnosis/treatment of ruptured ectopic: